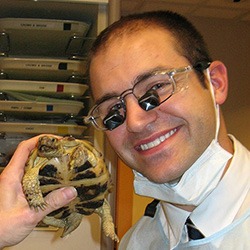 (This article was originally published in the Pacific Northwest Herpetological Society (PNWHS) Newsletter.)

Nigel is a Russian Tortoise who came to PNWHS’ rescue at the age of 10 with a horrible ”laundry list” of medical issues.

Nigel was immediately taken to Eastside Avian and Exotic Animal Medical Center and examined by Dr. Cathy Johnson-Delaney. No flashdrive medical records required: Nigel’s entire medical history was evident on his shell. The vet was able to tell that he had been attacked by a large dog at least once. His beak had been nearly torn off and there were large puncture wounds on his carapace. She also could tell that he had a calcium and/or UVB deficiency growing up, due to his deformed shell and head shape, twisted toes & plastron curvature. (His head shape is deformed to a point where he doesn’t resemble a Russian Tortoise at all. She thought he looked like “Bill Slowsky,” the Comcast High-Speed Internet CGI tortoise.) He also had been dragged under something large and heavy (drag wound scars on top of carapace), suffered a prolonged dehydration (thick, rotten scales on feet & head, poor skin condition, improper shedding, feet frozen in wrong position), and hadn’t received timely care of his wounds (shell rot, scale rot, and broken/chipped marginals).

With a whole bunch of tender loving care, Nigel’s health improved. Nigel even participated in PNWHS’ “Reptiles Around the World” at the Pacific Science Center as the perfect ambassador for “How NOT to keep a tortoise.” In the following months, Nigel’s bottom beak continued to grow. The improperly-healed beak-tear began to separate as it moved closer to the bottom tip. It was causing the beak to grow leftwards, putting even greater pressure on the old tear. I was concerned that one wrong bite could break the entire bottom beak right off… almost always a death sentence for a tortoise. Something needed to be done right away. Nigel’s beak was ready to break… and the clock was ticking.

DR. SAGE TO THE RESCUE

As I brushed my teeth Tuesday morning, it dawned on me that my very own dentist’s office (a smorgasbord of dental cements!) was literally one mile from my house. In a moment of clear insanity, I decided to take a chance on calling my dentist for humans to see if possibly, urgently, he could dental-cement the torn beak of a rescued Russian. “Bring him in at 4:30,” was the amazing reply. I was thrilled. When I put him in his “to-go” carrier, Nigel wasn’t. My concerns for the least-invasive solution for Nigel (one mile drive) would override any common sense on attempting dentistry on a conscious, cranky tortoise…. Someone was going to be pooped on for sure.

Despite a frightening amount of personal knowledge of filling techniques and processes, this was the very first time I had ever had the opportunity to actually watch a dentist in action. I held Nigel and carefully put my index finger on his shoulder to prevent him from retracting his head, a trick only he (as a Russian tortoise with his deformed head shape) can do. Dr. Sage and his assistant carefully etched the area around the tear, and then applied the composite filling. As Dr. Sage carefully sculpted the filling to perfection, I couldn’t help but think the “ist” in dentist should actually come from the word “artist.” It was quick and quite an impressive work: microscopic speed-spackling on a wiggling, non-compliant target. If you’ve ever worked with tile, you’d be impressed. Nigel pooped. 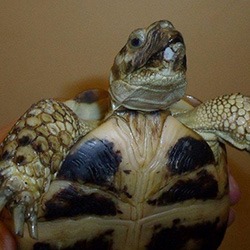 We were back home within 20 minutes. Nigel pouted and dug himself a new hiding spot. The true test came the very next day, when I brought Nigel a plate of his most favorite greens. He came running, as always; then as always, a careful survey and a little bite. But what came next brought tears to my eyes: as Nigel chewed his dandelion leaf, he realized “something” was different, and he turned and looked up at me. He paused for a moment, then turned his attention back to his salad and immediately attacked the greens like a velociraptor. I was stunned. I’ve never seen him eat that way before. Vigorous, vigorous eating, similar to the “Velociraptor Feeding” scene in a certain movie I know….

No one can guess how many years had actually passed since Nigel was last able to bite his food properly, but obviously to him, it was like riding a bike, so to say…. He has continued to chow down more food than I’ve ever seen him eat, thoroughly enjoying his “new” beak. It is heartwarming to see, and a great reward for all that the members and supporters of PNWHS do in our community.

PNWHS would like to thank Dr. Sam Sage and everyone at Sage Family Dentistry of North Seattle for their time, tools and talent in helping us continue our mission of helping herps in need.

Font Resize
Contrast
Accessibility by WAH
Call Us Text Us